The original DJI Mavic Pro released all the way back in 2016. With the release of the newer DJI Mavic 2 Pro and Zoom in August of 2018, is the original still a valid option? I’m going to give you all of my thoughts on the original Mavic Pro and let you know what I think. Is the DJI Mavic Pro worth buying in 2019?

Price.
Here’s the main reason to be considering a DJI Mavic Pro right now. At the time I wrote this, you can get a DJI refurbished Mavic Pro for $799 as well as off Amazon for just $754. This is what makes the decision of the Mavic Pro vs Mavic 2 so difficult. While yes, the second generation of the DJI drone is going to be better in almost every way to some degree, is it worth doubling the price you’re paying. I’ll be covering a few of these specific differences.

Mostly The Same As The Mavic 2.
Now when I say “Mostly”, this is what I actually mean. Almost everything about the drone, from the Mavic Pro going to the Mavic 2 Pro has been upgraded. “Mostly”, that stuff has only been upgraded very slightly though. The specs of the new drone say it can fly about five miles per hour faster, that it has about four more minutes of battery life, and that the range is about 1 kilometer more than the original. Is that little bit of an improvement enough?

It’s A Great Drone.
I have absolutely loved owning my Mavic Pro and at this point there just isn’t enough reason for me to upgrade. The drone is still getting regular updates from DJI, it takes 4k video and amazing pictures.

Reasons Not To Buy

The Mavic 2 Pro And Zoom.
The newest of the DJI drones are reasons in themselves to not purchase the original Mavic Pro. If money isn’t that big of an issue, or you just need to have the latest and greatest, there is almost no reason to not go with the second generation.

Professional Camera Performance.
If you are a professional, looking for the best cameras around, but haven’t upgraded to an Inspire yet, the Mavic 2 Pro or Zoom might have some extra features you’d like. The benefit of the Mavic 2 Zoom is pretty obvious, the zoom functionality. But the Mavic 2 Pro adds better image resolutions, higher video bit rates, and a much larger ISO range and color profile.

New Intelligent Features.
The Mavic 2 series has a whole new list of what DJI calls Intelligent Features. Things like Hyperlapse, Dolly Zoom, and ActiveTrack 2.0. While some of these types of features can be really cool, to me they tend to get pretty gimmicky after a few uses. If these are some features that you need from your drone, definitely start researching the Mavic 2.

With the Mavic 2 series already released and a Mavic 2 Pro+ and Mavic 2 Zoom+ being rumored, it might be hard to want to purchase this older technology. It’s all going to come down to what you want to be able to do and how big your budget is. If you’re looking for a great drone that can take 4k video of your travels, I don’t think you’re going to be able to beat the current prices of the Mavic Pro. If you need the latest technology, are a professional videographer, or have a seemingly unlimited budget, I don’t think there is any reason to not upgrade to the Mavic 2 Pro.

If you just purchased a drone or are thinking about it, make sure you know if you need to register it with […]

Welcome to Drone Basics! The perfect place to learn about drones. This site is intended for people that know very little about […]

Drones are making an impact in just about ever aspect of the human way of life right now. From deliveries to how […]

The drone industry is growing very fast. Even police have started using drones to catch thieves. Victoria Police have ordered more than […] 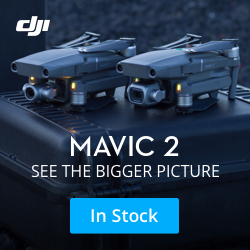